I am not a morning person at all, yet I have chosen a career that will force me to wake up early every weekday morning for the rest of my life.  With my schedule getting more and more hectic, a nice cup of a coffee is sometimes the only thing that drags me out of bed in the morning, so I decided to create a coffee station that would make me feel like I was at a luxurious B&B.  I’ve been cleaning out my house, and realizing that it’s nearly impossible to give older furniture away.  I’m always preaching about being environmentally conscious rather than throw things out to rot in a landfill, so I’ve been learning to get handy and repurpose things around the house.  Turning this old dresser into a coffee station shelf was actually very simple, and only required a few tools, like a circular saw, orbital sander and a coat of paint!

I had to determine what would be the most functional way to design the shelves, mostly because I bought Craig a massive coffee roaster for Christmas and there was nowhere else to put it.  I decided to leave one drawer at the top of the dresser for storage, but removed all the other drawers to create my shelf space.  Then I knocked out the horizontal pieces of wood meant to hold the drawers.  The supports were mostly jointed pieces of wood and came apart after easily being hit with a hammer.

I measured the inside of the dresser where I wanted to place my shelves, then cut a piece of plywood using my circle saw.  It was a terrifying experience, but I’ve gotten a lot better with it.  The advantage of this dresser is that it already had a support system where I was putting the shelves.  If cut precisely, they slide right in and sit on the pieces of wood that held the drawers.

So the next series of pictures are of Craig sanding and painting the dresser.  I actually did most of it, I just looked ratchet as anything so I made Craig be the model since he’s pretty rugged with his hairy chest and Nelson Treehouse Supply hat.  BUT just know, this whole thing was my idea and I could have done it without his help because I’m a totally independent woman.

I covered the plywood shelves in a shelf liner contact paper I had lying around that matched my color scheme.  To give the shelves further support, I attached two 2.5 inch corner brackets. 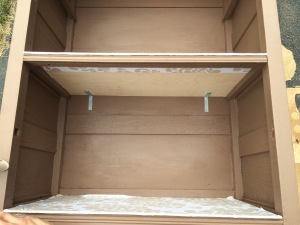 SO CUTE, RIGHT?  Time to move it into the kitchen and fill it with crap! 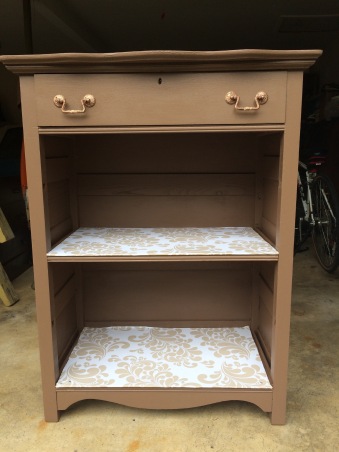 The shelves hold the coffee roaster, coffee tins and spoons and cups. 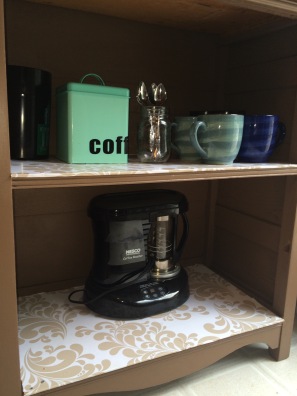 I lined the drawer with the same shelf paper and use it to store tea, cocoa, coasters and extra plastic utensils.

And the top holds my coffee maker (soon-to-be Keuring, but only with the environmentally friendly basket, NOT the pods), a tray for stirrers, cream and sugar, and a coffee cup filled with beans and tea light candle to set the mood.

Super simple, super thrifty and a good way to let your guests know they can make their own coffee, you’re sleeping in 🙂

One thought on “coffee break”